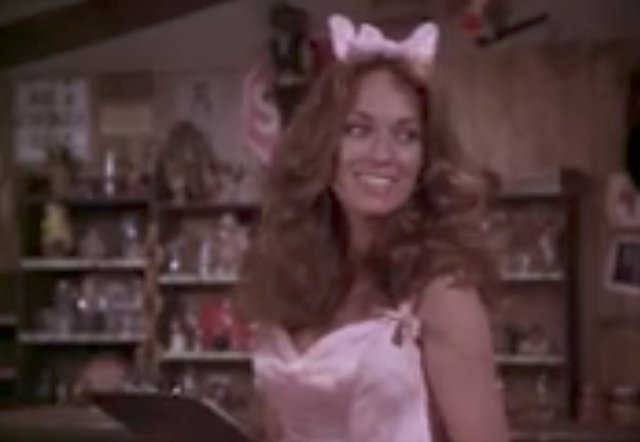 Welcome to Episode #32 of the Kibbe and Finnegan show! If you’re new to the show, Mike Finnegan and I have taken our Dukes of Hazzard fandom and turned it into a full fledged automotive podcast Gong Show of sorts, completed with a full episode review from The Dukes of Hazzard. It’s every 40-year-old’s dream, right?

Dukes of Hazzard S2E20: Return of the Ridge Raiders

Do you know who Hugh Hefner is? Great. Imagine that Boss Hogg wants to compete with Hugh Hefner with his own line of “Pretty Piggy” waitresses at the Boars Nest, a business model which has a fairly obvious path akin to Hooters, Tilted Kilt, etc. To fund his empire he must reallocate the tax payer subsidized grant that has been allocated to the Hazzard County Senior Citizens Center, which Uncle Jesse is vehemently in the process of saving, despite the fact that he’ll never ever go there at any point in the future of this TV series. Anyways, his old moonshine gang called the “Ridge Raiders” are fighting Boss illegally, he tries to stop them, Bo and Luke get blamed, and yada yada yada. Solid episode, the General jumps (thank God), and hijinks ensue.

-No Rosco – and a new Sheriff. Again. This one named is “Buster Moon.”

-Corndog has an original document showing the outline of episode for this season, and it’s totally different than the order that it actually aired. Might explain some of the silliness with Daisy’s RoadRunner.

-The Pretty Piggies are Boss’s version of the “Playboy Clubs” – that used to be a local lounge with chicks wearing the Playboy buddy outfit.

-Coop the Snoop was played by actor Lou Richards, a TV character actor still working today. He also starred on Different Strokes, Facts of Life, and Flo – the spinoff to the TV series Alice.

-Sheriff Buster Moon was played by actor James Hampton whose most famous role might be as the werewolf dad of Michael J Fox in the movie….Teen Wolf.

Brought to you by the FSM Girls… who were glad to have a sponsor.

The opening shot starts off with recycled jump footage and then a drive by shot of Al Wyatt Jr. sliding around in the same ’69 Charger R/T that we have seen many times over the last few episodes. This car has the painted over rocker moldings and and vinyl top trim. This car will eventually receive a full cage and be jumped in the episode “Carnival of Thrills”.

The car that was used for interior camera shots… you will notice that this car has extremely dark brown painted interior. Even though it is clearly brown, it almost looks to be black in color. Fans will sometimes say they they remember seeing General Lees on TV with black interior. I’ve never seen one, but I can see how they would be mistaken. Also notice… this is one of the few times you will see a General Lee w/o roll bar padding.

3:44 – When Bo and Luke pull off to side of the road to help Uncle Jesse with his truck, you will notice the car seen here has the wheel opening’s enlarged. Just like the R/T mentioned above, you will continue to see this car many times throughout the episode, and other episodes. This is the same car that was turned into the “4×4” GL in the episode “Arrest Jesse Duke” (S2 E12). Notice the damage to the fenders.

This Uncle Jesse Pickup seen here… and throughout the rest of the episode is also pretty interesting. This truck is an F250 and is 1 of 2 Jesse trucks that are still alive today. Currently, the truck belongs to a friend who lives in Australia. He actually stumbled on the truck while driving his TV series General Lee around with a friend. If I remember correctly, they were stopped at a gas station and a guy walks up and took notice of the car. They started talking and the man said that he had “a Jesse Truck”, and he would consider selling it. He invited them to his house to look at it. They didn’t get their hopes up, but went to look at it anyway. They looked the truck over and started to see all of the correct markings… sure enough, it was the real deal. Turns out, the man worked for Warner Brothers and when the series ended, he needed a pickup for everyday use. So he purchased it. Attached it a picture of the TV series General Lee and the Jesse pickup on the day that he found it.

11:17 – The third General Lee that we see is a ’68. This car gets the most screen time on this episode. It has a large dent right above the driver side front wheel and is missing the driver side wiper arm. Thanks to the pointed ’68 dash pad and the dent in the fender, it is pretty easy to spot throughout the rest of this episode. The wiper arm finds its way back on the car later in the episode.

18:13 – Bo and Luke pull up in the General and talk to Sue Anne while she is washing the firetruck. This truck is still at Disney Golden Oak Ranch… at least it was when I stopped by in 2004. Attached is a picture of the firetruck.

38:00 – Shenanigans… The two police cars crash and are out of commission… as well as the “rent-a-cop” car. But at 39:30, one of the police cars are back on the chase along with the rent-a-cop car… both in pristine condition.

42:58 – When Bo and Luke pick up their reporter friend at the bus stop, he climbs through the window and sits right on Luke’s lap. Yes, really. 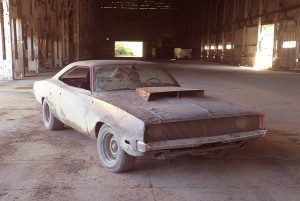 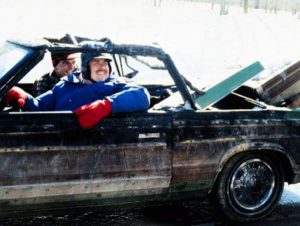