TMCP #195: Jim Campisano, Editor Super Chevy Magazine on What It’s Like to Have His Awesome Job and How He Chooses Feature Cars!

This weeks interview is with Jim Campisano, Editor of the world famous Super Chevy Magazine!

When Jim was a child he grew up reading automotive magazines and dreamed of the day he could actually work for one professionally. He went to Rutgers and studied English with an emphasis on writing, and went on to work into the news profession. Of course, his real passions surrounded around writing about 4-wheeled objects, so when he saw an ad in a magazine for a copy editor position at a car magazine (and even though he’d have to take a pay cut to get the job), he went for it and has never looked back.

For over 20 years Jim as worked in the automotive magazine world. He started at CSK Publishing, but through multiple acquisitions and sales it eventually became the information media giant it is now, Source Interlink. Source now owns such magazines as Hot Rod, Car Craft, Muscle Mustangs and Fast Fords, Super Chevy, etc., and is the premier automotive enthusiast publishing company in our industry.

During the interview Jim shared that he truly does feel he’s in a “dream job” scenario. He’s constantly learning about teasers in the industry, attending trade shows and events, and test driving new Corvette’s (which, granted, someone has to do….so it mas as well be him!)

When it comes to deciding which cars to place into Super Chevy, there are a number of factors he has to take into account. First and foremost, the car itself must be unique, well built, or well themed. I did ask whether specific colors or year/models came into play, and Jim commented that while he could fill a years worth of magazines with nothing but red ’69 Camaros, the year/model component isn’t really set in stone, and while eye-popping color choices used to be very important (due to a limited number of color pages in the magazine), today’s full-color magazines make it a non factor.

With that said, since today there is presently no lack for magazine caliber vehicles to feature, sometimes the most helpful decision point for him is whether or not there is a captivating story behind the car itself (which was the biggest reason he chose my Chevelle for a Super Chevy piece.) In the end, in the world of journalism, a good story makes all the difference, even when the eye candy of the car itself is superb. He mentioned that one of the more painful parts of his job is declining cars from the magazine, as for many people (including me) seeing their car in print is a huge achievement.

You can check out Jim’s work at Super Chevy Magazine or you can interact with him at the Super Chevy Facebook page or come out to a Super Chevy event.

Thanks for the interview Jim, and I am looking forward to seeing the Chevelle in Super Chevy Magazine! 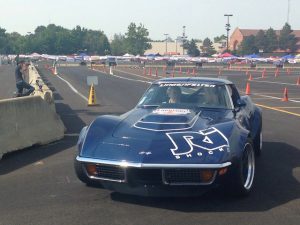