Welcome to Episode 66 of  the Pro-Touring.com Podcast!

In this episode we had a chance to have our good friend Tom Farrington on the show to give a live report from the recent Midwest Muscle Car Challenge event. Unfortunately for Tom, a small mistake during installation of hew new Baer brakes on his ’66 Chevelle caused a mishap on the road course that locked up on wheel, hurt a caliper, and flat spotted a brand new BFG Rival tire, but he still managed to place high in the autocross segment and had quite a bit of fun.

For those that didn’t know, Tom’s “day job” is that of a professional fire fighter, and he serves his country during the weekend in the military reserves. He did this interview from the firehouse! (His wife Deb is also a fire fighter….and races a ’64 Chevelle wagon. Feel free to be a little bit envious.) Tom was cool enough to do this interview live from the firehouse, and he made the disclaimer that if an alarm occurred that he’d be leaving, pronto!

May Will Be a Busy Month!

During the show we went through upcoming event locations, times, and details. You can get year round updates in the Events section in the Pro-Touring.com forums. 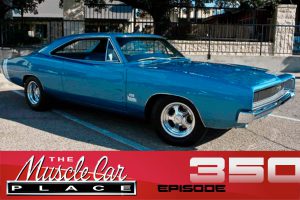