Welcome to Episode 53 of  the Pro-Touring.com Podcast!

1) SEMA 2013 begins next Tuesday, Nov 5! Rob and Larry will be hitting several SEMA venues together including stops at all sponsor booths!

2) Goodguys PRO Class feature drivers will be signing autographs at SEMA! All 10 drivers will be on hand at the Goodguys booth on Wednesday from 10-11am to sign the posters and meet with fans. The drivers include Rob McGregor, Mary Pozzi, Bret Voelkel, Mike Maier, Brian Finch, Phil Gerber,Cheryl Herrick, Kyle & Stacy Tucker and Roger Burman.

3) Also on Wednesday, at 2pm the winners of the all new “Goodguys GOLD” awards will be announced at the Goodguys booth. These brand new, exclusive awards will be presented to just 5 lucky winners. All cars on display at SEMA which have a Goodguys decal on their windshield will be eligible for a Goodguys GOLD award. Award winners will receive a special billet anodized GOLD bar trophy as well as an invitation to the Goodguys 16th Southwest Nationals November 15-17 at Westworld in Scottsdale, Arizona to park in a special area reserved for GOLD winners.

4) You can still attend the 2013 Optima Ultimate Street Car Invitational! Tickets are available for $30 via www.optimainvitational.com. The field will include a full slew of pro-touring, late model domestic, euro and import cars. It’s the most diverse field ever assembled!

5) Maybe it’s just a coincidence, but we can’t help but notice that ever single previous winner of the OUSCI is a member of Pro-Touring.com….

Hotchkis to Re-Enact Bullitt at SEMA!

Hotchkis Sport Suspension will undoubtedly have one of the coolest displays at SEMA, as the company has announced they will bring the chase scene from the movie “Bullitt” to life with customized versions of the famous green Mustang and black Charger. The display will include a 1967 Mustang Fastback and a 1969 Charger R/T owned by actor Patrick Warburton, and while purists might argue the model years aren’t accurate to the original cars, we think it will be cool all the same.

Of course, there’s a purpose behind both cars, as Hotchkis will be showing off their latest suspension and chassis components for both vehicles. For the Mustang that means Hotchkis’ Stage 1 bolt-on TVS suspension system including front coil springs, rear leaf springs, front and rear sway bars and monotube shocks. 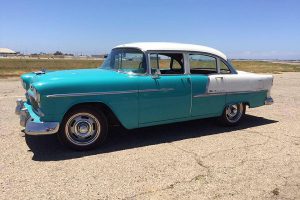