This weeks interview is with Eric Tingwall, Technical editor of Car and Driver magazine. Eric knew what he wanted to do from a young age and and made a plan to capture his dream. As a Michigan native and car obsessed youth he dreamed of some day working for Car and Driver Magazine. As such, at Michigan State he obtained dual degrees in mechanical engineering and journalism ….. and the rest is history!

I asked Eric on the show specifically to discuss his fantastic review of the new Z/28 in the May 2014 edition of Car and Driver. He personally had the chance to flog the car in depth, and his article really showcased the value of it all, despite the fact that it’s the highest priced Camaro in the current lineup (even more than the ZL1). With my recent experience in building a pro-touring car, I can tell you the parts are not cheap. Eric agreed that the cost of the high quality parts in this car far exceed what anyone could pay to duplicate the efforts in another car. The engineering and build quality alone are amazing and as a package it is compared to with vehicles costing much more.

First and foremost, the Z/28 was built to be a track runner, and as such it’s stuffed with race car calibur components, but done so with the “sortedness” you’d expect from an OEM vehicle. The braking system on the Z/28 utilizes carbon ceramic rotors and six piston monoblock calipers capable of 1.5g’s of deceleration force. Eric said that between the grip of the tire, the braking system, and handling of the car, that the Z28 is capable of actually slipping the tires on the rims more than one full rotation in a pass around a race track. To help counter act this, General Motors actually media blasts the rim to tire face to give the rubber something to grip to.

The Camaro Z/28 is currently the only vehicle on the road to utilize spool valve technology for damping control based distance of shock travel. The real benefit of this valve is actually for the engineer as it allows him to make advanced, better informed engineering refinements on the shock control circuits up front (i.e. tuning). This style shock has been utilized on Formula One race cars in the past but never in a production car. They allow the Z28 to be tuned for track use at the factory and dramatically affect handling while at the same time making the street ability of the car a lot nicer than one would expect.

Engineers really paid attention to details on this iconic Camaro right down to the badge on the grille. The “FlowTie” bowtie  on the grille was literally hollowed out to allow greater flow and better cooling to the tune of 2 degrees of oil and coolant temperatures. Another feature is the ride height sensors left in from a normal production Camaro. These sensors tell the drive train to not reduce torque if the tires leave this earth and engine speed increases  This keeps the “power on” and is not so jarring when touch down occurs. This is affectionately known as “fly mode”. Little details that were also “not” included are the trunk trim, some of the padding in the rear seat, and high end interior trim. Leaving out these niceties help decrease overall weight and increase power to weight ratio.

Mark Stielow, program manager for the Z28, in this Car and Driver video, covers details regarding the Z28 aero package.

You can follow Eric on Twitter at https://twitter.com/EricTingwall or read his articles at Car and Driver magazine at newstands or online.

This was a great interview about an amazing car and an incredible amount of detail.
Thanks Eric! 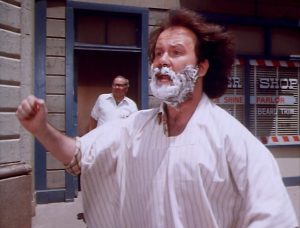 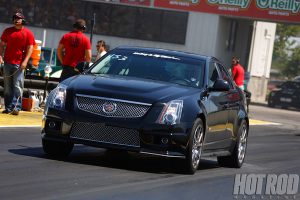 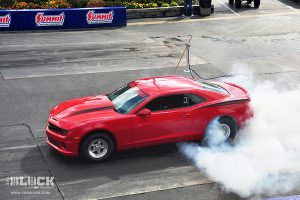