For our 200th show (happy birthday to us!), this weeks podcast was a LIVE report from the Barrett Jackson Scottsdale Collector Car Auction by our own Bernie McPartland.  Bernie checked in from this “lifestyle event” where nearly 1400 collectible cars were being sold in front of over 300,000 people. Bern mentioned that the facilities this year were amazing and greatly expanded, and was happy to report that the muscle car market is alive and just as strong as ever and is well represented at the auction this year. Many friends of the show are there also including the Ring Brothers and Mark Stielow.

Some high level vehicles he highlighted in particular were Simon Cowell’s car, which is the first ever “certified pre-owned” Bugatti Veyron, Mark Stielow’s trend setting ’69 Camaro “Mule”, and the Ring Brothers Ford Fairlane “Afterburner”. Other notables are the Gas Monkey Garage COPO Camaro, a Batmobile from the 1989 Batman movie, as well as both the Snake and the Mongoose along with car hauler trucks and Hot Wheels track.

Among the throngs of people, Bernie spotted Don Prudhomme promoting the sale of The Snake as well as Richard Rawlings of Gas Monkey Garage signing autographs.

He also met Chris of CarFlipping.com which is described as the “Travelocity” of car searches. Members are able to enter a specific car they are looking for and the Flip Finder tool will return daily results of members specific searches. Chris told Bernie  just how rare some cars can be to find and how Flip Finder can be a valuable tool.

Bernie met Floyd Garrett of Floyd Garrett’s Muscle Car Museum in Sevierville Tennessee (just outside of Gatlinberg TN.). Floyd has three items in the auction, a ’55 Chevrolet “Old School” car that was built in the 60’s, a 70 1/2 Z28 all numbers matching car, and a 1964 327/375 hp fuel injection engine. Floyd told Bernie about some of the interesting exhibits at the museum and a little history about himself too.

There is always something to see and do while at the Barrett Jackson Auction and Bernie took advantage of that and was able to go around an autocross track in a new Bondurant Corvette. He said going around the track was amazing and of course he brought his audio recorder so he could bring us along with him.

Thanks Bernie for the great report! 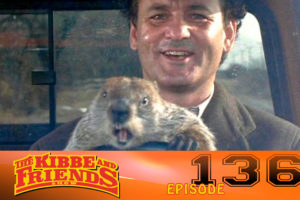