If Corey Eubanks is doing his job correctly you’ve likely never heard of him, but if you’ve ever wanted to know who was behind the wheel of the General Lee in the early 1980’s you know his name well. His dad, legendary game show host Bob Eubanks, helped him land his dream job as a stunt person on the Dukes of Hazzard in 1981, and he’s been flying high in cars ever since. He was the youngest person ever to jump the General, and his Hollywood career has lasted 30 years. He’s jumped the Mercury in the movie Cobra, done work on the A-Team, Transformers, Starsky and Hutch, and most recently in the movie Fast Five in doing the major bus flip at the beginning of the movie! I asked Corey what his favorite muscle car has been that he’s performed on screen with, and he was quick to say that it was the General because it was his “first love.” He’s driven many, and to date he’s the only person still jumping the “GL” (as he calls it), though he’s not sure if another opportunity will ever arise.

As a kid of the ’80’s it was always my dream to jump the General Lee, and Corey described in full detail how the stunt performers survived the whole thing. To begin, the car was weighted in the trunk to keep it from tumbling end over end in flight. Second, nitrous oxide systems were installed in the car to give the extra kick of speed required to proper the General up over the kicker ramps that would launch the car up high in the air quickly. Third, and probably most importantly, the driver of the car was suspended from the roll cage of the car first via bungee cords, and belted into the seat second. The weight of the driver was almost completely suspended as a result and the end result was that he or she would not compress any vertebrae upon landing. Cool, huh?

Corey still does stunt work on a regular basis but has also started organizing a sport called Auto Barrel Racing. Think of it as horse barrel racing, except with cars. Really! If you’d like to hone your stills at driving and drifting, check it out. You can also visit Corey on his Facebook page.

Thanks for the interview, Corey! Keep up the great work. Thanks as well for teaching me as a kid that cars can fly! 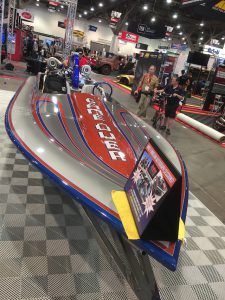 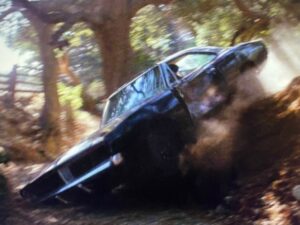