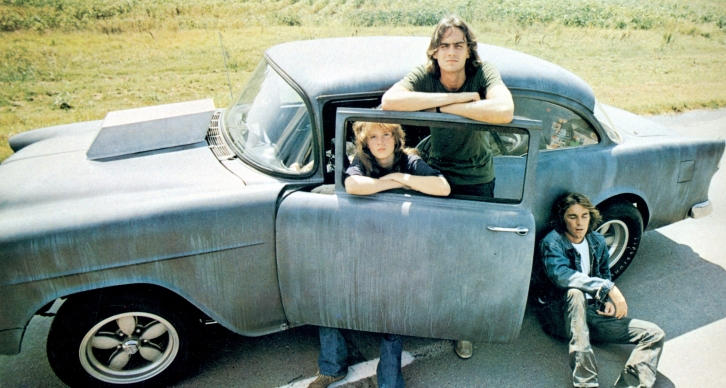 Before I give the movie review, I’m happy to announce that we are now into our second week of being LIVE on Patreon! Thank you so much to those of you who chose to support the show directly, and we promise to use all funds to continue building the show you want and the one we love to make. We have also figured out what we’re going to do for Patreon supporters and you’ll hear about in an upcoming episode.  You can go hear to add to the mix: www.patreon.com/kfshow.  Thank you again!!

In this episode of the show we finally reviewed the movie Two Lane Blacktop, a movie that Finnegan’s been wanting to hit since we started. Without a doubt this is the last piece of the cinematic puzzle that makes Mike…well, Mike. It’s a movie that has clearly influenced him greatly not because it’s a fantastic comedy or anything, but because it’s about two guys running the country in a homebuilt gasser ’55 Chevy. In their lives that’s all there is, it’s all they need, and all they want. Or is it? Along with way they pick up a random hitchhiker girl who (like the two guys) has no apparent backstory and no dreams going forward. They race an older guy – cross country – in a ’70 GTO Judge who is as philosophical as he is total crackpot wacko. There’s a ton a dialogue in this movie, yet there’s nearly none at the exact same time. This was done in the era of movie making where sometimes the plot and meaning was a secret known only to the writer and director…and Finnegan freaking loves it. In fact he loves it so much that his favorite car ever is a ’55 Chevy gasser named Blasphemi. Kibbe has decided that the psyche of Finnegan is made up of a very simple equation, and once you understand it you’ll have unlocked the key to Mike’s brain, soul, and car:

And finally, Stamps.com is back in this episode as a show sponsor! For those of who like to sell parts online (especially eBay), this will be right up your alley of time saving awesomeness. With Stamps.com you can access all the services of the Post Office right from your desk. Right now you can use KAFS for this SPECIAL OFFER: a 4 week Trial that includes postage and a digital scale! To get the deal go to Stamps.com, click on the Radio Microphone at the TOP of the homepage and type in KAFS.